Arab International Academy Celebrates the Graduation of its Second Cohort 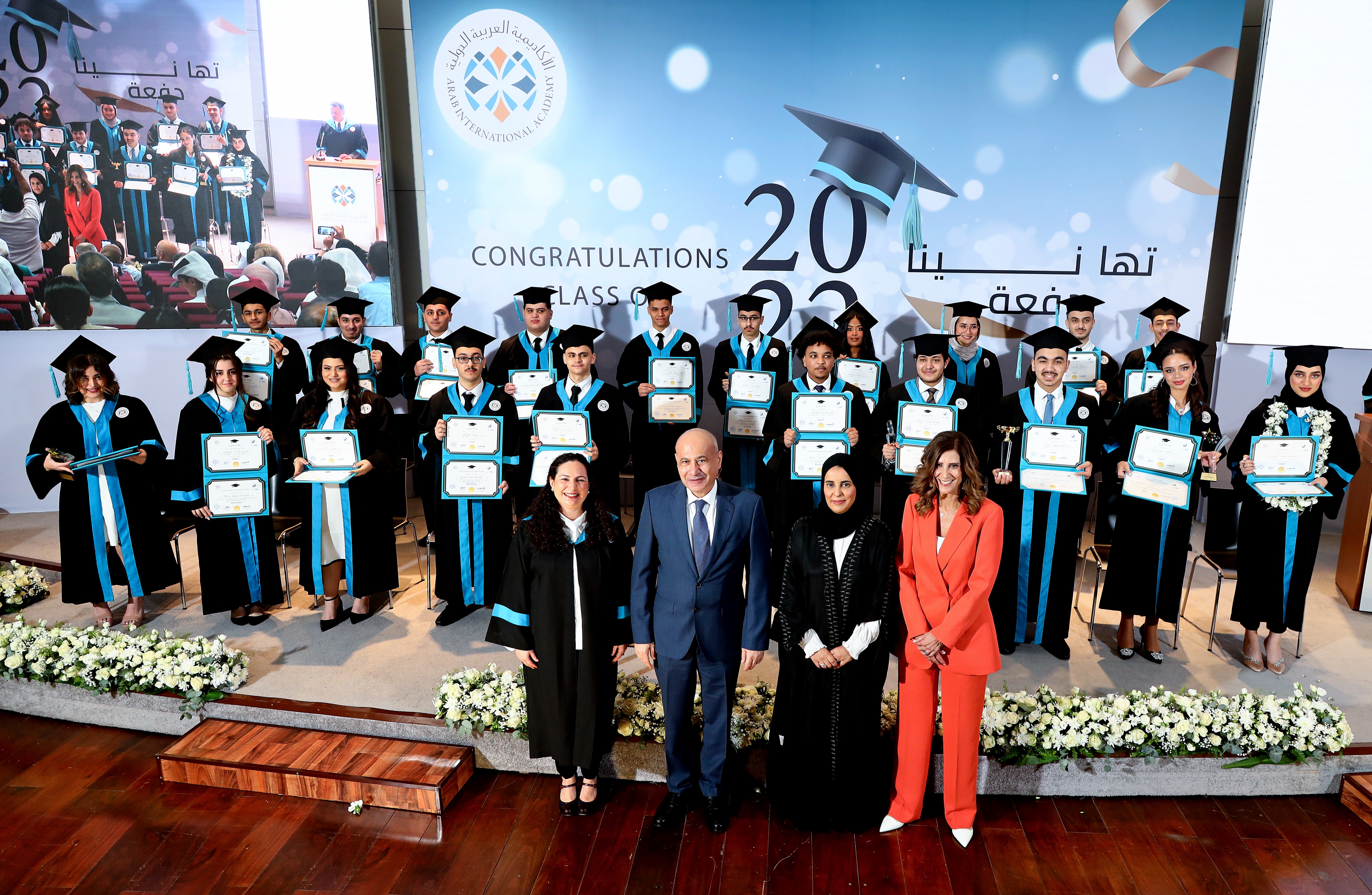 Under the patronage of his excellency Sheikh Dr. Abdulla bin Ali Al-Thani, Chairman of the Board of Trustees of Arab International Academy, The Academy celebrated the graduation of its second cohort of 20 graduating seniors in a commencement ceremony held at the Doha Institute for Higher Education in the presence of the parents, staff, and representatives of several local organizations. The Academy also hosted Dr. Asmaa Al-Fadala, Director of Research and Content Development at the World Innovation Summit for Education (WISE), as a keynote speaker at the ceremony.

His Excellency Shiekh Dr. Abdullah bin Ali Al-Thani, expressed the importance of this occasion and his pride in the previous cohort's results in the International Baccalaureate exams, which exceeded local and international averages. He also spoke about the Academy's achievements, especially the local and international accreditations it obtained. At the end of his speech, he congratulated the students and their families on graduating and wished them a bright future full of discovery and learning.

In turn, the superintendent of AIA, Mr. Mahmoud Amra, expressed in his speech how proud he was of this accomplishment. He addressed the graduates saying, "Many challenges await you in the future, but remember that alongside these challenges is the happiness and satisfaction that results from your accomplishments and the excitement of future discoveries of places, people, and possibilities.  My sincerest hope is that the AIA has prepared you well for the next stage of your life and that we have shaped you into balanced, inquiring, open-minded, and principled individuals."

As for Dr. Asmaa, she gave an inspirational speech in which she referenced her own educational journey and the challenges she overcame to successfully be where she is today after obtaining her doctorate. She also talked about the lessons she learned through that journey as both a PhD student at Cambridge and a hiker. She emphasized that the central lesson she had learned and wished to share was the importance of perseverance, as with perseverance, one can reach the highest peaks despite the difficulties.

The ceremony included many standout events, including the speech given by the class Valedictorian, Awwab Abdul Karim, where he addressed the audience, saying: When our school embraced us, fulfilled our hopes, understood our thinking, and developed our view of life, we became swords that cut through the ruggedness of life.

While, Maya Gharaibeh, the representative of the graduates, stated, "I believe that every milestone we reached helped us go even further and soar ever higher and achieve even more. We appreciate how AIA taught us the value of unity and how diversity becomes a strength once we unite."

The ceremony included various musical performances by the Academy's music teacher, Mr. Ahmed Al Rabeh, and students Adam Nahar, Selena Nahar, and Kenza Obeid, and a special video that showcased the memories of the graduates from past years.

At the end of the ceremony, Ms. Samia Bishara, Member of the Board of Trustees, Dr. Asmaa Al-Fadala, Mr. Mahmoud Amra, and Ms. Dalal Hammoudeh, Principal of the Secondary School, distributed awards to students who excelled in different areas and handed over the graduation certificates to the students. This was followed by the commencement announcement of the second cohort of students from the Arab International Academy. It is worth noting that most of the graduates have received acceptances from many prestigious international universities.

The Arab International Academy was founded in Doha, Qatar in 2016 with the goal of establishing a high-level private international school that provides a challenging and well-rounded international educational experience. To achieve that goal, we have drawn on the very best of international thinking in our choice of curriculum and approaches to 21st-century teaching and learning. AIA is an International Baccalaureate (IB) World School for the Diploma Programme (DP), the Middle Years Programme (MYP), and the Primary Years Program (PYP). AIA is also accredited by the Ministry of Education and Higher Education in Qatar and is a member of the Council of International Schools (CIS). AIA has also recently received an extension of the Qatar National School Accreditation for five years.

Arab International Academy Celebrates the Graduation of its Second Cohort